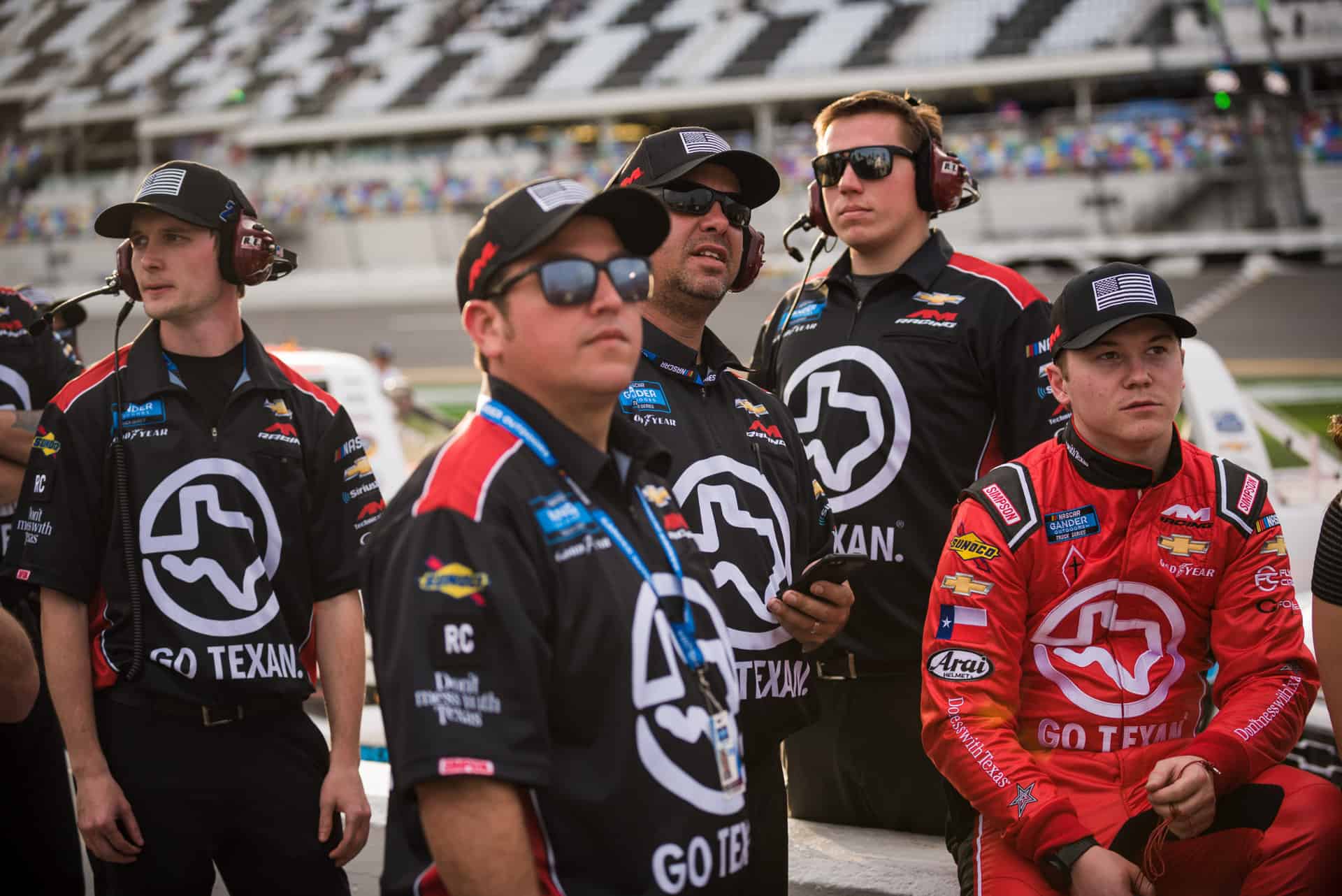 MOORESVILLE, N.C. – Off to a solid start in the NASCAR Gander Outdoors Truck Series (NGOTS) this season, AM Racing has shifted much of their concentration during the recent off weeks to the fifth race of the season at Texas Motor Speedway on Fri., Mar. 29.

Alongside his full-time team with connected roots deep within the Texas landscape, Austin, Texas native Austin Wayne Self will see his No. 22 Chevrolet carry primary support from the United Sorghum Checkoff Program, while also commemorating GO TEXAN and their 20th year celebration.

The Sorghum Checkoff returns to the team after supporting Self during the last three NGOTS races at the 1.5-mile speedway elevating awareness of the benefits of American ethanol.

The Sorghum Checkoff focuses on developing direct awareness of the benefits of using sorghum as a fuel and feedstock in the ethanol industry. This serves as the foundation of demand for the sorghum industry, as ethanol producers typically use about one-third of the sorghum crop to produce clean-burning, high octane fuel.

The Sorghum Checkoff program was introduced to AM Racing through GO TEXAN who is celebrating its third year of partnership with the team and serving as the primary partner on Self’s truck for a majority of the 2019 season.

GO TEXAN was established in 1999 to promote Texas agriculture products under one easily recognized trademark- an iconic brand in the shape of Texas.  Fast forward 20 years and TDA’s award-winning campaign continues to thrive as a powerful marketing catalyst; envied by competitors yet admired and respected on a worldwide stage.

This year, AM Racing has started a rocker panel program where GO TEXAN members can ride alongside the famous mark with their own branded logo being featured on the truck.

Joining Self, Texas entrepreneur and team owner Tim Self and the remainder of the AM Racing team is Ag Commissioner Sid Miller.

Since taking office, Miller and his staff have visited every continent on the globe to promote Texas products. His historic visit to China led the way to opening the Chinese market to Texas beef for the first time in decades. With his relentless efforts Miller is putting Texas producers on the world stage.

On Mar. 29, he will attend the NASCAR Gander Outdoors Truck Series race to support Self and the team alongside Sorghum Checkoff Renewables Director John Duff.

With Texas being one of the top producers of Sorghum, the Texas Department of Agriculture and the Sorghum Checkoff have a deep-rooted relationship.

“I always look forward to going back home and competing at Texas Motor Speedway,” said Self. “It’s one of my favorite tracks on the circuit, plus I have the opportunity to spend a lot of time with family, friends and our partners.

“My relationship with GO TEXAN and the Sorghum Checkoff is very important to me. Their mission is not only something I believe in – but makes me even prouder to be a Texan. We’ve had a lot of success together and continue to build our partnership with the Sorghum Checkoff, so I’m looking forward to a strong result.

“To have Ag Commissioner Sid Miller join us for the race is a huge plus for us,” added Self. “He is a very busy individual, but he is familiar with what we’re trying to do with AM Racing and wants to show his support. I’d like nothing more than bring home a strong finish for not only him, but all of our Texas partners.”

Along with its signature mark in the shape of Texas, GO TEXAN celebrates, promotes and supports the business savvy and plainspoken grit Texas agriculture is known throughout the world.

Whether it’s grown, sewn or served on a plate, more than 26 million Texans shop, travel and dine out in full support of Texas business and agriculture.

About the United Sorghum Checkoff Program:

In the ethanol industry, the United Sorghum Checkoff Program focuses on developing direct awareness of the benefits of using sorghum as a fuel and feedstock.

Sorghum is truly a versatile crop that can be grown as a grain, forage or sweet crop. The United States is the world’s largest producer of grain sorghum, having produced 480 million bushels in 2016.

The United Sorghum Checkoff Program is a producer-funded organization dedicated to improving the sorghum industry through research, promotion and education.

AM Racing is a NASCAR Gander Outdoors Truck Series (NGOTS) team owned by entrepreneur Tim Self. Established in December 2015, AM Racing is headquartered in Mooresville, N.C. Operated by Self, a native of Austin, Texas, the team is prided on faith, honesty and intelligent performance. The team has named Austin Wayne Self as its driver for the 2019 season.