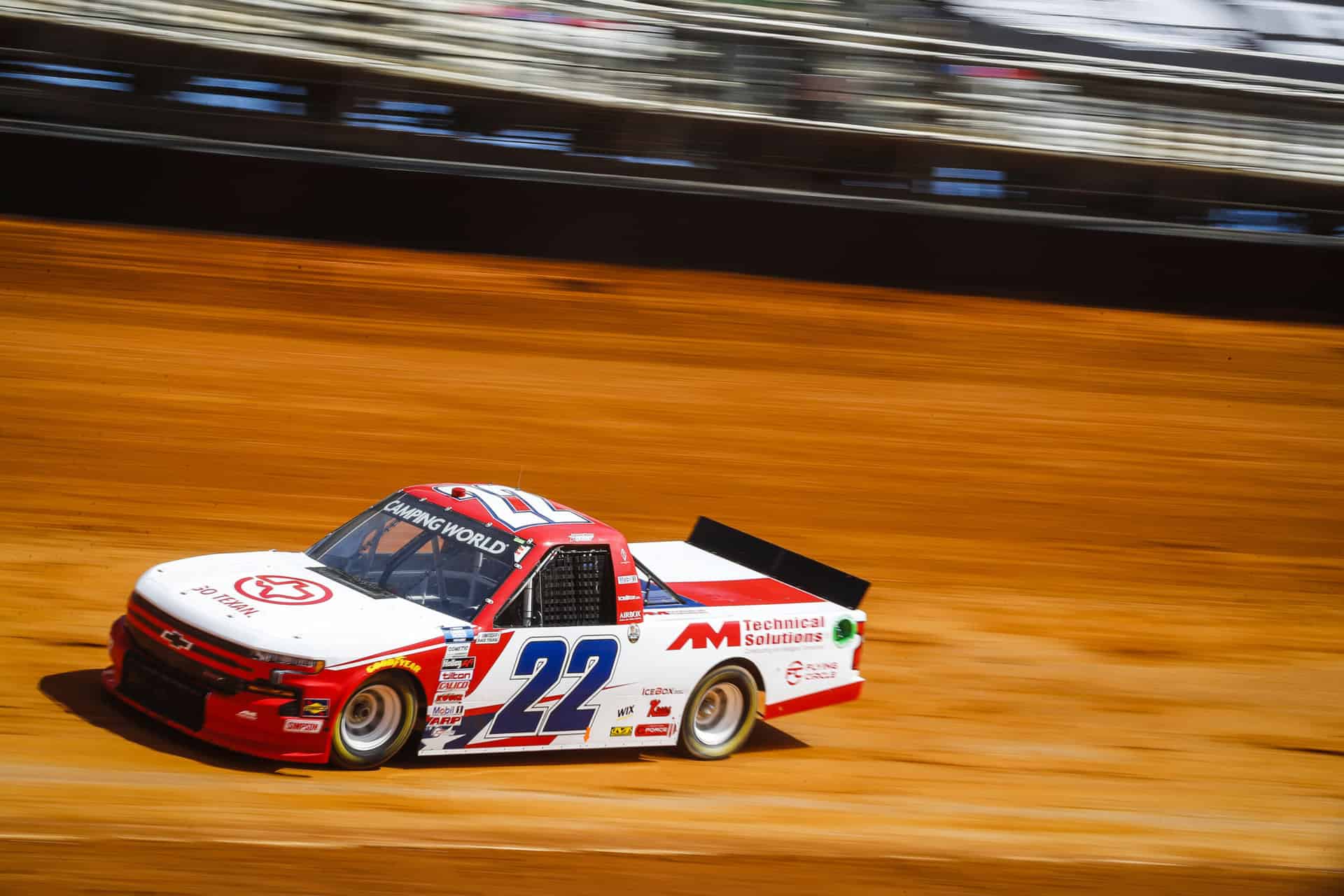 Taking Over: For the first time in the NASCAR Camping World Truck Series history, the tour will visit Knoxville Raceway for Friday night’s Corn Belt 150.

The historic half-mile facility known as the “Sprint Car Capital Of The World” has been hosting racing events since 1901 – but will host its first NASCAR national series event nearly 120 years later.

Knoxville will serve as the second and final dirt race for the NASCAR Camping World Truck Series this season.

Texas Pride: Two Texas-based companies will return as the primary partners for Austin Wayne Self this weekend at Knoxville Raceway.

The Statesville, N.C.-based team will sport the signage of GO TEXAN and AM Technical Solutions on the No. 22 Chevrolet Silverado for the 13th NASCAR Camping World Truck Series (NCWTS) race of the season.

Career Year: Just past the halfway point of the 2021 NASCAR Camping World Truck Series, Austin Wayne Self and AM Racing are enjoying a banner year.

13 races into the season, the team has only one finish worse than 23rd and maintains an average finish of 17.0 entering the Corn Belt 150.

Hey Teammate: For the first time since the 2017 NASCAR Camping World Truck Series (NCWTS) season, AM Racing will field a second entry in competition.

AM Racing is exploring opportunities of expanding their operation for other select races in 2021 ahead of the 2022 NCWTS season.

This weekend, however, will be his second dirt NCWTS race of the season. In March, Self-finished 10th on the Bristol (Tenn.) Motor Speedway Dirt driving for AM Racing.

Austin Wayne Self Truck Series Dirt Stats: At NASCAR Camping World Truck Series tracks classified as a dirt track, Self has made four starts throughout his career with two top-10 finishes, while also carrying an average finishing position of 12.5.

Starting 21st based on the metrics set by NASCAR without practice or qualifying, Self-recovered from early race handling woes in his No. 22 GO TEXAN | AM Technical Solutions Chevrolet Silverado to claim a solid 19th at the checkered flag.

To The Point(s): Entering Knoxville, Self sits 14th in the championship standings with 273 points earned and a loss of one position following the CRC Brakleen 150.

Just 62 points separate Self from 10th in the championship standings currently held by Carson Hocevar and 135 points in the arrears from fifth locked by Todd Gilliland with nine races remaining this season.

In the race for a Playoff spot, Self is 41 points from the cutoff currently held by Chandler Smith.

AM Racing also secures 16th in the NCWTS owner standings.

Calling the Shots: Ryan Salomon will continue to lead Austin Wayne Self and the AM Racing team this weekend at Pocono.

This weekend marks his 17th race as crew chief for Self and in the NASCAR Camping World Truck Series. During his tenure, he guided Self to an average finish of 16.2 during the 2020 and 2021 seasons, respectively.

Career Rundown: Since 2016, Self has competed in 120 NASCAR Camping World Truck Series races, delivering two top-five and 10 top-10 finishes. He finished a career-best 12th in the championship standings in 2018.

Spanning six years of Truck Series competition, he maintains an average finish of 18.4.

Lineup: In addition to GO TEXAN and AM Technical Solutions continuing their roles as the primary marketing partner for Self in 2021, the AM Racing team will also receive support from At Home Concert Experience, AIRBOX Air Purifier, Don’t mess with Texas, CForce Bottling Company, Flying Circle, and Kreuz Market.

On Knoxville Raceway: “Very excited to get to Knoxville Raceway. I love racing on the dirt. It’s a blast, especially with a truck. We are bringing back the same No. 22 GO TEXAN | AM Technical Solutions Chevrolet Silverado we earned a top-10 finish on the dirt earlier this year at Bristol and that has my confidence peaking.

“Just hope we can have a good night on Friday night and continue to turn heads in the garage.”

On Pocono Raceway: “It was an OK race for us. Nothing spectacular. We have some work to do though if we’re going to put ourselves and our No. 22 GO TEXAN | AM Technical Solutions Chevrolet into the Playoffs. We are running out of time and there are only two races left in the regular season.

“We will continue to work hard and fight, but do not be surprised if we attempt to throw a Hail Mary at Knoxville and | or Watkins Glen, it may be our only chance.”

On Teammate Brett Moffitt: “Thrilled to have Brett Moffitt as a teammate this weekend at Knoxville. He is a competitive race car driver and I know he brings a great wealth of knowledge, experience and drive to the AM Racing organization.

“Hopefully, we can rekindle what AM Racing did in 2017 at Daytona – when both AM Racing trucks finished inside the top-10 in the same race.”

On 2021 Season: “We have two races left to throw our team into the Playoff mix. It is not going to be easy, but we won’t be going down without a fight.

“We’ve been very solid to the start of 2021. We were able to rebound in our most recent race at Pocono, but we can’t stop there. We must push hard and stay humble and keep doing what we’ve been doing all year long.

“Playoffs or not, I’m proud of this AM Racing team.”