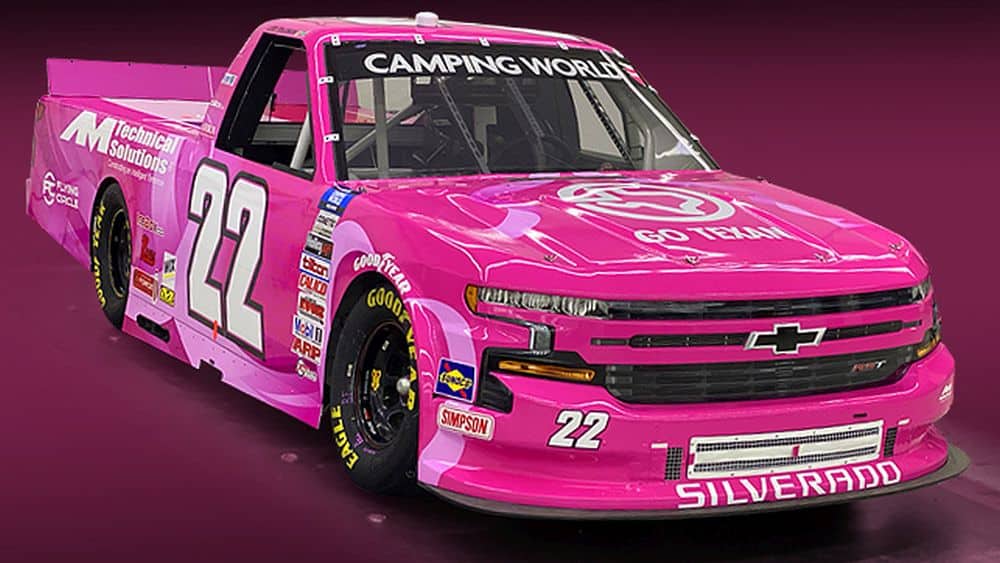 The Statesville, N.C.-based team will sport the signage of GO TEXAN and AM Technical Solutions on the No. 22 Chevrolet Silverado for the 21st NASCAR Camping World Truck Series (NCWTS) race of the season.

Honoring A Hero: Most of the drivers in the field for Saturday afternoon’s United Rentals 250 at Martinsville Speedway will sport the names of cancer heroes on the signature panels of their cars, including veteran NCWTS driver Austin Wayne Self and the AM Racing team.

Names were nominated by the cancer heroes’ family members or friends as part of the Martin Truex Jr. and The NASCAR Foundation Honor a Cancer Hero Auction presented by AdventHealth.

Proceeds from the auction benefit the Martin Truex Jr. Foundation and The NASCAR Foundation, two non-profit organizations that are champions for the health and well-being of others.

Lisa Salomon will ride with Self’s No. 22 GO TEXAN | AM Technical Solutions Chevrolet Silverado for the penultimate NCWTS race of the year. Salomon is the mother of crew chief Ryan Salomon and is currently fighting breast cancer.

New Look: The last weekend of October is providing an opportunity for AM Racing to showcase its support of National Breast Cancer Awareness Month.

Austin Wayne Self’s traditional paint scheme has been replaced with a No. 22 GO TEXAN | AM Technical Solutions Chevrolet decorated in a favorable pink outline.

The truck will also showcase Breast Cancer Awareness ribbons signifying their overwhelming support to Lisa Salomon, mother of crew chief Ryan Salomon who is bravely fighting her own battle.

Looking Ahead: With the 2022 NASCAR Camping World Truck Series season on the horizon, AM Racing is starting to look ahead to its future.

The organization is focused on adding a second truck to their team next year.

The Statesville, N.C. team has the equipment and personnel to expand their footprint for 2022, whether it’s a part-time or full-time program.

Earlier this year, AM Racing tested the waters of a second Truck Series effort at Knoxville Raceway.

Brett Moffitt drove the No. 37 Concrete Supply | Destiny Homes Chevrolet Silverado in the event. Moffitt contended for a top-five finish before a late-race accident relegated the former Truck Series champion and team to a 38th place finish.

Banner Year: In the stretch zone of the 2021 NASCAR Camping World Truck Series season, Austin Wayne Self and AM Racing are enjoying a banner year.

20 races into the season, the team has just three finishes of 23rd or worse and maintains an average finish of 17.1 entering the United Rentals 250.

He is mirroring his 2018 Truck Series season where he finished a career-best 12th in the championship standings maintaining an average finishing position of 17.0.

In his previous six efforts, the Austin, Texas native has delivered a track-best of ninth in the 2020 NASCAR Hall of Fame 200 after starting 13th. Overall, he carries an average finish of 20.6 at the 0.526-mile paperclip.

Austin Wayne Self Truck Series Short Track Stats: At NASCAR Camping World Truck Series tracks classified as a short track, Self has made 18 starts throughout his career with one top-10 finish, while also carrying an average finishing position of 19.1.

Starting 12th based on the metrics set by NASCAR without practice or qualifying, Self’s No. 22 AIRBOX | GO TEXAN | AM Technical Solutions Chevrolet charged into the top-10, but was collected in the dreaded “Big One” at Lap 58.

The AM Racing attempted to repair the truck, but electrical problems sent Self to the garage and out of the race.

To The Point(s): Entering Martinsville, Self sits 14th in the championship standings with 419 points earned and maintaining his position following the Chevrolet Silverado 250 at Talladega (Ala.) Superspeedway.

128 points separate Self from 11th in the championship standings currently held by Grant Enfinger with three races remaining this season. Enfinger is the highest competitor who is not currently in the Truck Series Playoffs.

Self, however, is 25 points behind his next competitor Derek Kraus who occupies 13th in the championship standings.

AM Racing also secures 15th in the NCWTS owner standings.

Calling the Shots: Ryan Salomon will continue to lead Austin Wayne Self and the AM Racing team this weekend at Martinsville (Va.) Speedway.

This weekend marks his 24th race as crew chief for Self and in the NASCAR Camping World Truck Series. During his tenure, he guided Self to an average finish of 16.1 during the 2020 and 2021 seasons, respectively.

Career Rundown: Since 2016, Self has competed in 127 NASCAR Camping World Truck Series races, delivering two top-five and 13 top-10 finishes. He finished a career-best 12th in the championship standings in 2018.

Spanning six years of Truck Series competition, he maintains an average finish of 18.3.

Lineup: In addition to GO TEXAN and AM Technical Solutions continuing their roles as the primary marketing partner for Self in 2021, the AM Racing team will also receive support from, The Safe Air Zone, AIRBOX Air Purifier, Don’t mess with Texas, CForce Bottling Company, Flying Circle, and Kreuz Market.

On Martinsville Speedway: “I am really excited about having the opportunity to go back to Martinsville this weekend. It was really one of those tracks that I really struggled at in my first couple of starts, but then something clicked and it’s been a blast to race ever since.

“Last year, Ryan (Salomon) brought a fast No. 22 GO TEXAN | AM Technical Solutions Chevrolet Silverado to the track and we were able to grab a top-10 finish. I really would be disappointed if we left there on Saturday with anything less than a top-10.”

On 2021 Season: “It’s hard to believe there are only two more races left this year. Martinsville and Phoenix. This year feels like it’s gone by in a New York minute.

“I’m so proud of this AM Racing team and what we’ve accomplished this year. I really think we have shown the other players in the series, that we are the real deal.

“There are some good tracks left for our AM Racing over the next two weeks and I think there is definitely an opportunity to score more top-10s and hopefully even a top-five before we close the books on the 2021 season at Phoenix next weekend.

“We are already starting to work on 2022 and I’m excited about the future of this AM Racing team.”