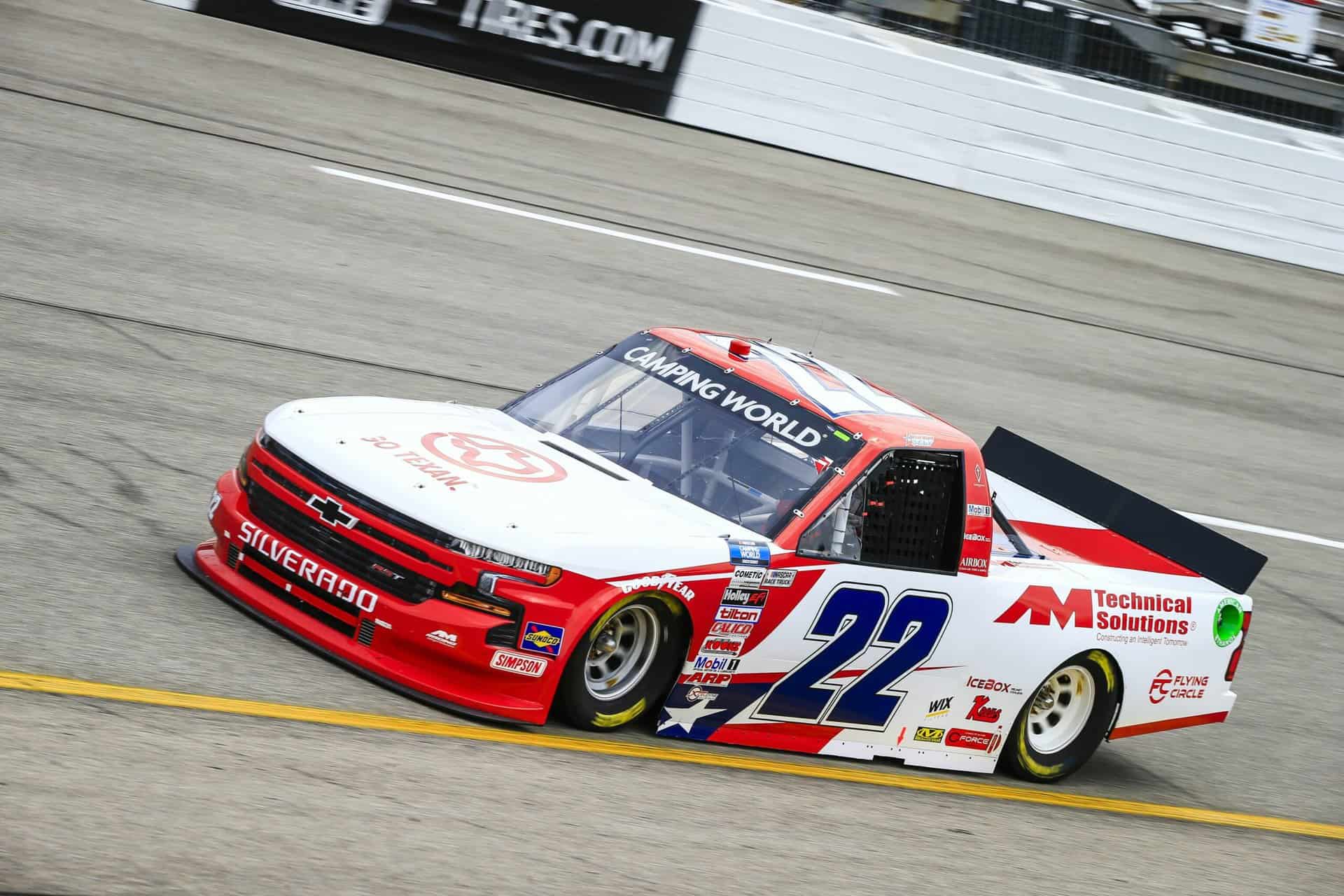 Solid Start: Four races into the 2022 NASCAR Camping World Truck Series season, AM Racing and driver Austin Wayne Self are backing up their solid pace from 2021.

Following their back-to-back top-10 finishes of the season at Las Vegas (Nev.) Motor Speedway and at Atlanta (Ga.) Motor Speedway, Self carries an average finish of 14.8 and is nestled 13th in the championship driver standings, with AM Racing holding firm in 15th in the Truck Series owner standings.

The Statesville, N.C.-based eyes Martinsville as an opportunity to recover from a tough race at Circuit of the Americas last month.

Texas Pride: Two Texas-based companies will also return to the team this weekend and serve as major partners for Austin Wayne Self this week at Martinsville (Va.) Speedway.

The Statesville, N.C.-based team will sport the signage of GO TEXAN and AM Technical Solutions and on the No. 22 Chevrolet Silverado for the fifth of 23 NASCAR Camping World Truck Series races this season.

GO TEXAN is a widely recognized brand. It represents a diverse collection of people, products and services that are genuinely Texan. Whether it’s grown, sewn or served on a plate, more than 26 million Texans shop, travel and dine out in full support of Texas business and agriculture.

Thank You For Your Continued Support: AIRBOX Air Purifier returns to AM Racing in 2022 and will serve as a major associate marketing partner for driver Austin Wayne Self in Thursday night’s United Rentals 200 at Martinsville Speedway.

AIRBOX Air Purifier prides themselves having the absolute best commercial grade air purifier on the market. It is categorically the best in every aspect, and it is built to last a lifetime.

True engineering controls solution based on a proven scientific technology to provide the desired indoor air quality you need. AIRBOX Air Purifier creates a Safe Air Plan to repopulate the business and create the safest possible environment for owners, employees, clients, students, visitors or just anyone who breathes air.

AIRBOX Air Purifier has partnered with the Statesville, N.C.-based team for six races between the 2020 and 2021 seasons respectively.

Retro Look: For Thursday night’s Truck Series showdown in Martinsville, AM Racing will showcase their 2021 primary paint schedule which consisted of a red and white look on their No. 22 Chevrolet Silverado.

The team will revert to their traditional 2022 paint scheme in the upcoming Truck Series race at Bristol (Tenn.) Motor Speedway on April 16th.

AM Racing x2: In the most recent race at Circuit of the Americas, AM Racing launched a second part-time NASCAR Camping World Truck Series team which will run a limited schedule this season.

Bearden embraced a mechanical issue early and late in the XPEL 225 but showcased his driving ability by delivering consistent top-15 lap times.

Tentatively, the next scheduled Truck Series race for the No. 37 is set for May 2022.

Last year, the organization tested the waters of a second Truck Series effort at Knoxville Raceway.

Brett Moffitt drove the No. 37 Concrete Supply | Destiny Homes Chevrolet Silverado in the event. Moffitt contended for a top-five finish before a late-race accident relegated the former Truck Series champion and team to a 38th place finish.

In his previous seven starts, Self has finished a track-best ninth in the fall of 2020 after starting a track-best 13th.

Austin Wayne Self Truck Series Short Track Stats: At NASCAR Camping World Truck Series tracks classified as a short track, Self has made 19 starts throughout his career with one top-10

finish, and carrying an average finishing position of 19.1.

To The Point(s): Entering Martinsville, Self sits 13th in the championship standings.

10 points separate Self from 10th in the championship standings currently held by Derek Kraus with 19 races remaining this season.

76 points separate Self from first in the championship standings occupied by Chandler Smith.

AM Racing’s No. 22 team secures 15th in the Truck Series owner standings.

Qualifying a strong 15th in his No. 22 AM Technical Solutions | GO TEXAN Chevrolet Silverado RST, Self’s truck spun on the first lap of the race and sustained heavy left-front damage after contact with another competitor.

The AM Racing team diligently made repairs to the truck throughout the race – making up four laps that put Self back on the lead lap which propelled the Austin, Texas native to a race high 12th before trouble struck the team again with two laps remaining.

Self was able to limp his battered race truck to the checkered flag and be credited with a disappointing 27th place finish.

Calling the Shots: Ryan Salomon will continue to lead Austin Wayne Self and the AM Racing team in 2022, including this week at Martinsville.

This weekend marks his 30th race as crew chief for Self and in the NASCAR Camping World Truck Series. During his tenure, he guided Self to an average finish of 16.4 during the 2020 and 2021 seasons, respectively.

Career Rundown: Since 2016, Self has competed in 133 NASCAR Camping World Truck Series races, delivering two top-five and 15 top-10 finishes. He finished a career-best 12th in the championship standings in 2018.

Spanning six years of Truck Series competition, he maintains an average finish of 18.3.

The couple is also expecting and will welcome their first child, a girl in June of 2022.

Lineup: In addition to AM Technical Solutions and GO TEXAN continuing their roles as the primary marketing partner for Self in 2022, the AM Racing team will also receive support from, AIRBOX Air Purifier, Don’t mess with Texas, CForce Bottling Company, Flying Circle, Kreuz Market and JB Henderson Construction.

“We were in contention to back up our top-10 finish from 2020 last October but ran into some late race trouble and had to settle for a top-20 finish instead. Ryan (Salomon, crew chief) is bringing a really good race truck to the track this weekend and I hope we’re able to execute and deliver our third top-10 finish of the season.”

On 2022 Season: “After everything we embraced in the most recent Truck Series race at Circuit of the Americas, the team is fired up to get to Martinsville and continue our solid start to the season.

“We had issues from Lap 1 at COTA and when I thought we were finally back in a position to maybe sneak in a top-10 finish at the end of the race, the chaos intensified and we were a part of it.

“Hopefully, Martinsville will be a lot kinder than COTA was.”